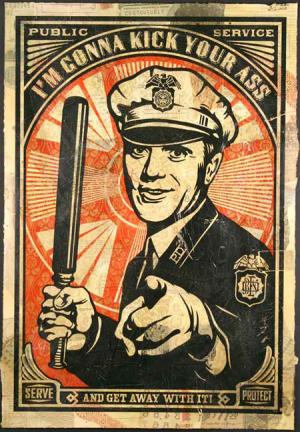 On April 21st at 12:00 pm there will be a 10,000 Man March Against Injustice. The event is being convened to show the police department and city hall the outrage over the amount of excessive force used by the North Chicago police.

The brutality of the department came to the public eye when in November 2011 police beat Darrin Hanna so badly he died one week later at the hospital. Since then several people have come forward claiming police brutality. However claims were mounting before news of this even broke. Click here to read a Chicago Tribune article describing some of the mounting cases against the police department.

One of the most shocking episodes to come out since the beating death of Darrin Hanna is this video showing the beating of a seemingly passive man right in police headquarters.


The man didn’t come forward right away due to fear and the public didn’t find out about this atrocity until well after it happened.

The 10,000 Man March came about after that state police investigation into Darrin Hanna’s death stated no police misconduct. Please read this article and view the pictures to get an idea for yourself.

To make matters worse, the investigation results were handed over to the horribly unethical Lake County State’s Attorney Michael Waller. This man repeatedly pressed charges against an innocent man named Juan Rivera despite DNA evidence showing his semen wasn’t found in the victim he was accused of raping and murdering. Later the Illinois Supreme Court Had to dismiss the charges on the grounds no reasonable evaluation of the evidence could find this man guilty.

Other cases with the same circumstances have arisen and the prosecutions have been perused with the flimsiest explanations of how someone else’s DNA got into the victim. The whole situation needs to be changed in North Chicago and Lake County in general. Hence the march on April 21st. It will begin at the North Chicago High School and end in front of city hall and the police department.

Previous: War Is Not Glamorous
Next: We Will Take No Prisoners