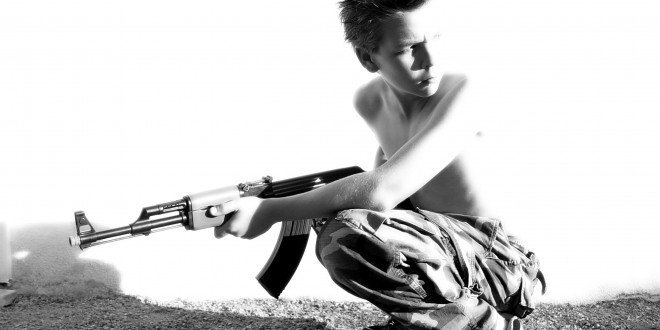 Instead of taking this 30-day leave at home in New York, I went to my grandmother’s farm in South Carolina. My mother came to South Carolina to see me before I left. She brought my daughter Madeline with her. When I met them at the train station, it was the first time I thought about not coming back from Viet Nam alive. At least I managed to see the two most important people in my life before I left.

When it was time to report to my new duty station I boarded a plane for San Diego, California. Once in San Diego, I reported to Camp Pendleton for my Viet Nam training. When I arrived at my company, the Gunnery Sergeant told me I was three days late. He also said I could go to the brig for tardiness. I responded, “Hey, if no one is going to be shooting at me in the brig, I’ll go.” He relied, “Wise Ass, you’d like that, but I’m sending you to Nam with no delays,” he boomed. Just prior to boarding the plane for Viet Nam, the sergeant said we had time to make a last minute phone call. I called my daughter Madeline to tell her I loved her.

My marine unit arrived in Da Nang in March of 1969. Upon our arrival, we were divided into groups according to our military occupation. I stood with the infantrymen. The sergeants counted the infantry group and decided there were not enough of us for whatever needs had to be met. So they took a third of the truck drivers and a third of the cooks and told them they were now infantrymen. One white cook fell to the ground crying and pleading with the sergeant to let him stay with the cooks. The sergeant looked down at this guy, who had tears streaming down his face and snot hanging from his nose, and said, “ Why would I leave you with the cooks? You are not a cook anymore, you’re in the infantry now and Marines don’t cry, so get the fuck up.”

Once again we were divided into groups and sent to different Marine camps throughout the country. Five of us were sent to the Marine Air Group # 39 in Quang Tri Province. We were told to board a C-130 plane and it would take us to our new camp. However, the plane landed in a place called Dong Ha and we were all told to get off.

We asked the marine working at the air terminal how to get to our camp. He told us to go out the door and walk south down Highway One. We walked out of the terminal and Highway One was right there. As we looked in both directions, we saw nothing but Vietnamese people everywhere. We decided we were not going out amongst all of them without a weapon. I repeated this to the guy in the terminal and he said I couldn’t stay there because he was closing up. I told him, “For me to leave here you are going to have to put me out.” Then one of the guys with me said, “Oh no, he’s going to have to put us all out.” As we stood there staring at each other, another fellow came in to drop off a box. The worker asked him where was he going next and he replied,” Quang Tri.” He asked him if he would give us a ride and he agreed. So we jumped into the back of this open pick up and rode down Highway One. We were so close to the Vietnamese on the highway we could see the wrinkles in their faces. If one of them had a gun he could have shot all five of us with ease. We saw buses that had so many passengers that some of them had to ride on the outside of the bus. They would hold on to the bottom of the window and put their feet on the side moldings.

Once at the camp we were handed weapons, camouflage uniforms, jungle boots and all the other little necessities for surviving in Nam. When I walked into my assigned hut, the first thing to hit me was the sweet smell of pot. I walked over to the brothers that were smoking and asked where could I get some. One of the brothers stood up and asked me if I was from New York City. When I said yes, he handed me a joint and said, “Welcome to Nam, my brother.” From that day until the day I went home, I smoked a joint everyday.

I was given a crew of Vietnamese whose job it was to fill sandbags. I became friendly with one of the crewmembers named Joe. He told me all the other workers wanted to work for Keo Rong (Me) because I didn’t treat them like dirt. But how could I? When I looked at the Vietnamese people the first thing I saw were people of color and as a person of color myself I knew what that was like.

One day Joe invited me to his house and while there he told me his mother hadn’t had a good night sleep in two weeks. I instructed him to get me a Ten Pack. (A ten-pack is ten rolled joints in a plastic wrapper.) He gave me the ten-pack and I went to sick call the following morning. At the infirmary I asked the guy working, “How many pills for pain could I buy with this ten-pack?” He pointed to a big jar on the desk and told me to help myself. He placed a joint in his mouth and strolled outside to smoke. I took a handful of pills. I carried them to work and gave them to Joe and told him to tell his mother to only take two at a time. The next day I went to his house and his mother was so glad to see me that she made me a magnificent dinner. Joe told me she took two pills but they didn’t help. So she took two more. They didn’t help. So she took two more and slept like a rock. The label on the jar said each pill was 500 milligrams so she took 3000 milligrams of some painkiller. She’s lucky she didn’t overdose.

After dinner, I walked up to Highway One to catch a ride back to the camp. The highway was empty. By not paying attention to the time, the curfew had gone into effect. I had no choice but to spend the night. I was given my own room to sleep in. I put my M-16 on automatic, put my finger on the trigger and sat in the middle of the bed the entire night. I didn’t even think about going to sleep. All I thought about was when the Viet Cong burst threw the door; the first two or three of them I see are dead men. In the morning I ran up to Highway One and caught a ride back to the camp. Back at camp I was just in time for the morning formation.

I remained at this base for nine months before President Nixon withdrew the 3rd Marine Division, which was our unit. However, twelve of us were not going home. We were told to hold the base for the Army’s 101st Airborne, who would be arriving in three days. We were alone for a week. We knew that if the Viet Cong wanted this base there would be no way the twelve of us could stop them. So we all spent everyday getting high and getting laid. When the 101st finally arrived, we were each sent to different Marine camps throughout the country. I was sent back to Da Nang.

In Da Nang, the Marines’ wore starched uniforms and shined their shoes. I don’t think we had starch or shoe polish in Quang Tri. The sergeant responsible for finding me a job was looking at me as if I had just emerged from the jungle. Which is exactly where Quang Tri was. But now I was in the civilized world. As we sat there, he asked me if could I fix trucks, and I said no. He asked me if I could cook, and I said no. He asked me if I could do five or six other jobs and each time I said no. Then another sergeant came in to tell him that a dog had bitten one of the other sergeants. When they finished discussing the incident, the sergeant in charge of finding me a job, turned to me and said, “You are the camp’s new dog catcher.” He asked me if I had ever done dog catching before and I said no. He said, “I’ll show you.” He gave me a pick-up truck, a cage, a dart gun and a box of tranquilizer darts and told me to go out and shoot every dog I see on base.

Every morning I got out of bed, got high and drove around the city of Da Nang. As long as I gave the daytime MP’s, at the gate, some pot they covered my back. At night I brought the MP’s hookers to screw in the guardhouse, because the night crew were a couple of rednecks that only drank. They would take turns, while one was screwing on the guardhouse floor the other one was sitting outside directing traffic. One day in Da Nang I went to a massage parlor for the first time in my life and I quickly discovered it was a trap. After two showers and two steam baths, I entered a room to get my rubdown. The woman assigned to me was gorgeous and sexy and by the time she was finished rubbing my nuts with warm oil, the ten dollars she wanted for sex was not a problem. It must have come out of my pocket by itself because I don’t remember getting up to get it. This woman did some things I didn’t know were humanly possible and when she finished I could barely walk. She said for another ten dollars we could “do it again.” I said maybe next time. I went to my truck, lit a joint and got myself together for the drive back to the base.

After four months of dog catching, it was time for me to rotate back to America. I came to Vietnam by plane. I departed by ship that traveled at the speed of 35 knots. It took 28 days to cross the Pacific Ocean and for 27 and a half of those days all we saw was water and sky.

Previous: 9/11: Shattering the Spell of Mythical Realities
Next: Will VA Hospitals Care for Gay & Lesbian Veterans?